Meeting with the Ambassador of Libya in Morocco Rabat, 14 February 2017 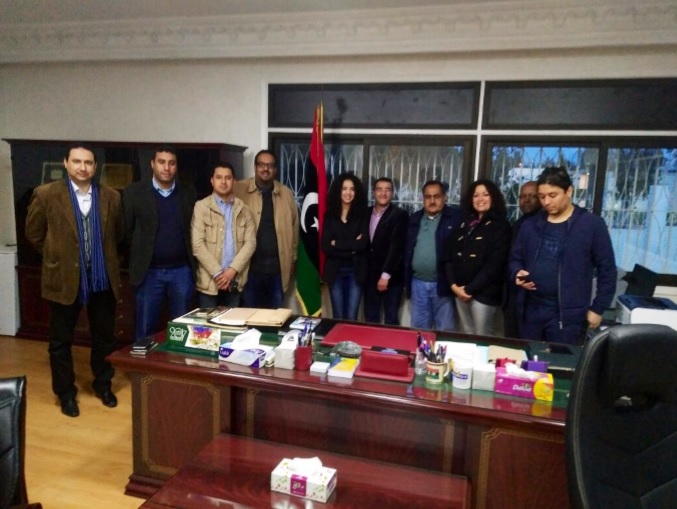 The UJEM organized, in Oujda (Morocco), the E-Maghrebian Days for training young people on Media, from February 11-13 2017. The Ambassador of Libya in Morocco responded to the invitation of the UJEM to attend this event. The UJEM wants to renew its thanks. During the opening speech of this event, Mr.Abdulmajid G SAIFALNASR encouraged young maghrebian people to take its destiny in hand to build a peaceful Maghreb. The Ambassador invited the UJEM to organize an event in Libya next year.

At the invitation of Mr. Abdulmajid G SAIFALNASR, and in the framework of a future cooperation for the organization of an event in Libya, a delegation composed of UJEM’s members, including its President Mrs Sonia Mejri, went to his Embassy in Rabat on 14 February 2017. During this meeting, the President of UJEM International thanked the Ambassador for his invitation to organize an event in Libya. She expressed the wish of UJEM to use this opportunity to organize the First Convention of the Maghreb which will bring together all the actors of the region : civil society leaders, youth sector actors, authorities… After two conferences in Tunis (2011 and 2012) and in Nouakchott (2011), the First Convention of the Maghreb will continue the work begun in the previous three events. Indeed, during the Tunis Conference (April 2011), the participants launched the Tunis Appeal, the ﬁrst call of youth for a United and Democratic Maghreb. Subsequently, at the Nouakchott meeting (December 2011), the young Maghrebian called out to the authorities and elites of the region to build a Maghreb of cooperation, peace, security and democracy. Finally, the second edition of the Tunis Conference (April 2012) stressed on the importance of a quick establishment of the Maghreb Youth Program and the creation of the Maghreb Studies Center.

Mr. Abdulmajid G. SAIFALNASR supported the organization of this First Convention for the Maghreb which, he added, will have a high added value for the Maghreb in general and Libya in particular. The Ambassador reafﬁrmed the moral and ﬁnancial support of Libya to the UJEM in organizing this summit. He also said that his country would support the preparation of the event with the highest authorities of the Maghreb States.

The UJEM delegation thanked the Ambassador of Libya in Morocco for his strong support. The UJEM will organize, in cooperation with Libya, the First Convention of the Maghreb, in all independence and transparency, like all events previously organized by UJEM.

The meeting was adjourned at 8 pm.

Sign the petition for the reopening of the land border between Algeria and Morocco!